For more information on this, please refer to this article.

Compared to old dc circuit breaker technologies which have been well established since the 1950s to 1970s, the development of solid-state circuit breakers is a relatively recent evolution in the field of circuit interruption.

Taking advantage of semiconductor devices with the high switching speed and high current carrying capacity developed during the past three decades, modern solid-state circuit breakers have an interruption speed of a few to 100s of microseconds as compared to milliseconds break time for arc chute based circuit breakers.

Because there are no electric arcs within the circuit breaker, external circuit elements are required to dissipate the stored energy in circuit inductance.

Interestingly, techniques have also been developed to allow some solid-state breakers to limit the fault current before the final interruption.

Solid-state circuit breakers have been applied to both ac and dc systems.

If you want to see more articles about switching in HVDC networks, please see this category.

In a hybrid circuit breaker current is normally carried through the low loss electromechanical contact, and the semiconductor switches are used to reduce or eliminate arcing during circuit interruption.

Solid-state and hybrid circuit breakers are largely still in the research and development stage.

As a result, very few commercial products based on these techniques have been reported to date. 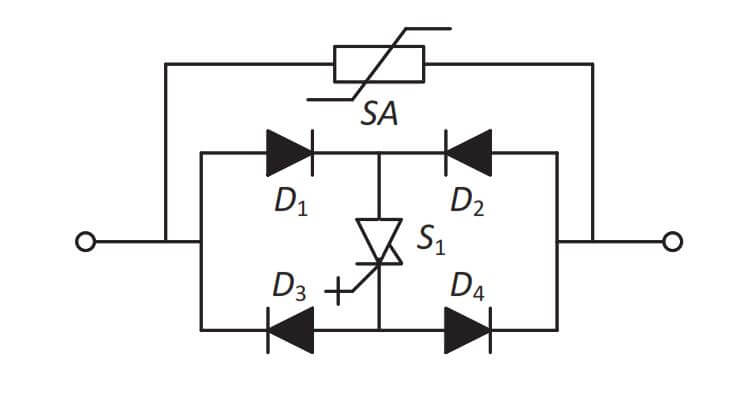 Solid-state circuit breakers rely solely on the solid-state switch to carry the nominal load and to interrupt current. Because the electric arc is eliminated, another mechanism is needed to dissipate the stored energy in circuit inductance. This is often achieved via a parallel-connected metal-oxide varistor (MOV). A MOV has a non-linear voltage/current characteristic.

This type of device is frequently used in high voltage systems as a surge arrester and is also used as a protection device for voltage-sensitive components.

Two bi-directional solid-state circuit breaker topologies are shown in Figure 2. When the breaker is closed, both semiconductor devices are turned on, allowing current to flow in both directions. During the current interruption, both devices are turned off, forcing the voltage across the devices to rise until the MOV starts to conduct and clamp the voltage across the devices.The conducting MOV acts to dissipate the energy stored within the circuit inductance.

While IGCTs are shown in Figure 2 (a), GTOs have also been used in older designs based on the same circuit topology.

Figure 3 shows a number of alternative designs which apply this concept to medium voltage systems. In these systems, multiple devices are connected in series to increase the total voltage withstand capability of the solid-state breaker. Diodes are also often connected in series with the main breaking switches to improve the reverse block voltage of the system, due to the limited reverse blocking capability of existing devices such as IGCT and GTO. The circuit is shown in Figure 3 (c) includes parallel-connected RC snubbers which are required for GTO-based systems to aid the turn-off of devices, and also contain two interesting features that might be applied to other solid-state circuit breakers. Firstly, it includes a parallel-connected resistor which is used to limit the fault current during the current interruption. During normal operation, this resistor is shorted out by the main semiconductor switches and therefore does not contribute to the on-state losses of the breaker. Secondly, a mechanical switch is connected in series to provide physical isolation.

While designs shown in this section are primarily designed for ac power systems, it should be possible to apply these designs to dc applications with minimal modifications. 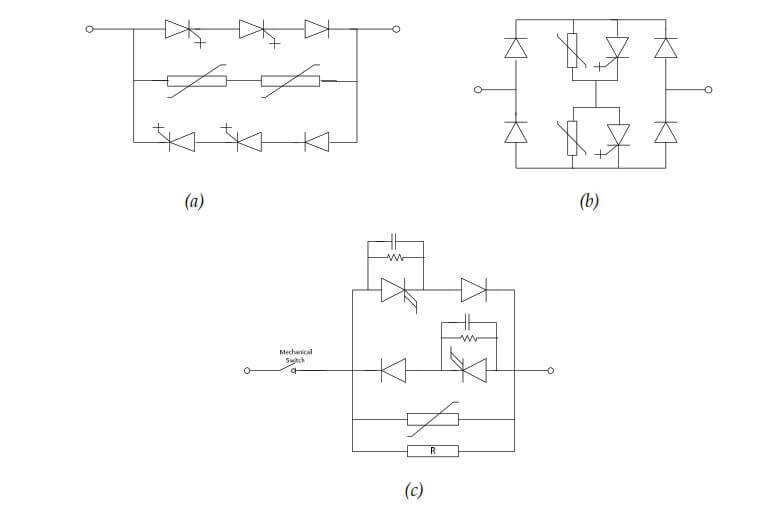 A simplified block diagram of a solid-state circuit breaker is shown in Figure 4. The solid-state current interrupter is comprised of a series string of solid-state devices to safely handle the DC bus voltage. A fast coordinated inverse-time controller provides the gate drive signal for the switches in the interrupter which synchronously open and close. The fast inverse time controller receives commands from either a manual input, from other breakers in the network, or from fast sensors that detect local fault currents. The inverse-time controller provides inverse trip time control for overcurrent states, and a fast instantaneous trip if the overcurrent limit is reached. These operational parameters can be adjusted for each breaker depending on its location in the network, providing an orderly, sequenced response to fault conditions.

A preliminary layout for an 8 MW load-level circuit interrupter is shown in photo 1. This interrupter
consists of six 4,500 V IGBTs (CM900HB-66H) connected in series. The 8 MW interrupter is
approximately 23” wide x 9” high  11” deep and weighs approximately 60 lb. The IGBTs are mounted
on water-cooled aluminum cold plates, which are, in turn, mounted on an electrically insulating mechanical
frame. The non-metallic water lines are sufficiently resistive to limit the current leakage down the lines.
This will require a small, closed-loop cooling system and a long-lasting ion-exchange cartridge to maintain
the resistivity of the cooling water.

This will require a small, closed-loop cooling system and a long-lasting ion-exchange cartridge to maintain the resistivity of the cooling water.

In photo 1 shows the preliminary mechanical layout of a 10 kV, 8 MW (800 A) IGBT interrupter. The IGBTs are mounted on water-cooled cold plates. Non-metallic cooling lines between adjacent cold plates are designed to stand off the full switch voltage when the switch is open.

Parallel arrays of these assemblies are used to meet the overall current requirements for the load.

Photo 1: Preliminary mechanical layout of a 10 kV, 8 MW (800 A) IGBT interrupter. The IGBTs are mounted on water-cooled cold plates

breaker can be significantly higher than those of a classical circuit breaker. The increased energy loss also leads to increased requirements for cooling. Traditionally large metallic heatsinks are used to passively cool power semiconductor devices, however, they can contribute to substantial portions of the systems’ overall size and weight. While the installation of active cooling systems such as forced air (fan) or liquid cooling might help to reduce the size and weight of the overall system, they introduce additional complexities such as increased acoustic signature, energy losses, and maintenance issues.

According to figure 5, the values are given in relation to the highest value per group.

For every criterion, small values are considered to be preferable. A small area, therefore, indicates an overall good performance of a switching concept.

Based on the findings, the solid-state circuit-breaker shows a good overall performance. Due to its fast switching capabilities, the turn-off time is small and only low current amplitudes occur. Also, the reliability and the complexity of the switching process can be considered to be good. However, the solid-state breaker suffers from high losses, compared to mechanical or hybrid switches.

An alternative concept with low losses, medium relative costs, and good reliability is the snubber mechanical breaker. Also, the conventional hybrid breaker shows an overall medium performance. It suffers from high peak currents due to the mechanical switch. The concepts taken from HVDC systems do not have a good performance within the voltage and power levels investigated. However, for higher voltages and powers, this might change. Finally, the concept of a pure mechanical-breaker is still interesting for low and low-medium voltage applications since it’s the only well-proven one. 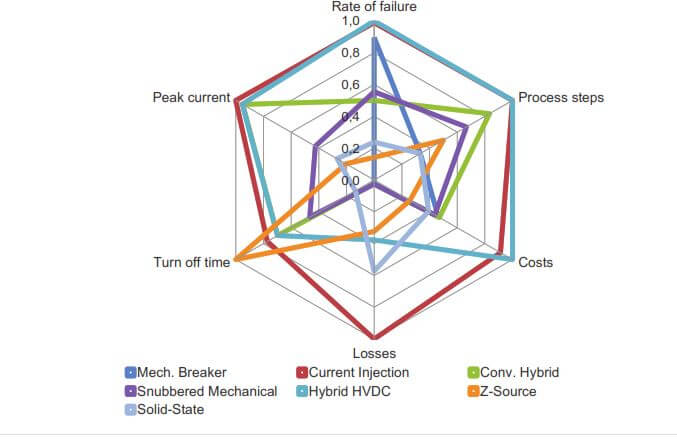 Figure 5: Overview of all switching concepts for DC circuit breakers

Table 1 summarizes the characteristics of the four circuit breaker technologies:

It should be noted that the time of preparation of this table is 2012. 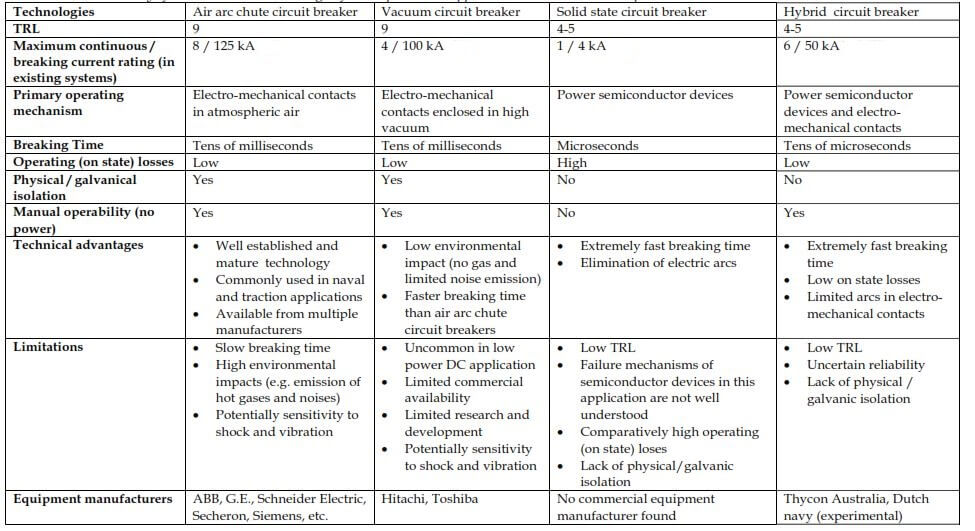