Fault current limiters (FCLs) are special power system devices used to mitigate and lower high short-circuit currents to much more manageable levels for existing protection equipment like circuit breakers (CBs). FCLs are generally installed with the goal to lower the available fault current to a level the CB is capable of interrupting safely prior to the CB beginning its opening operation. The FCL limits the fault current to a preset level based on the particular system configuration and system conditions. In the past, engineers were forced to either upgrade existing equipment to protect the system from the increased short-circuit capacity (if replacements can safely interrupt the new short-circuit level), or they must find a way to lower the short-circuit rating such as bus splitting, increase impedance of transformer, etc. The FCL allows the engineer to apply the chosen technology to avoid a full system upgrade of protection equipment like circuit breakers, which can be rather costly.

The SSFCL is an intelligent power-electronics device which is modular in design and can provide current limiting or current interrupting capabilities. It can be applied to variety of applications from distribution class to transmission class power delivery grids and networks. It can also be applied to single major commercial and industrial loads and distributed generator supplies. The active switching of devices can be further utilized for protection of substation transformers. The stress on the system can be reduced substantially improving the life of the power system. It minimizes the voltage sag by speedy elimination of heavy fault currents and promises to be an important element of the utility power system.

The SSFCL may be used directly in a transformer bus, as substation bus tie  and in a high capacity tie for         asset/load tie between substations.

The SSFCL may be applied in the output of an Independent Power Producer, or a radial feeder application,  where  a specific level of let-through current will be required to support downstream relay protection coordination.

The SSFCL uses semiconductor switches such as the Insulated gate bipolar transistor (IGBT), emitter turn-off thyristor (ETO), gate turn-off thyristor (GTO), integrated  atecommutated thyristor (IGCT), and other various devices. A SSFCL conducts current through the semiconductor switches in normal operation, and upon a short circuit, the semiconductors are gated “OFF” and force the fault current into a parallel branch impedance. The parallel impedance limits the fault current to a level the system can handle, and a breaker clears the fault some time later. A common design requirement for FCL is to be able to limit the fault current for 60 s before a breaker operates. An example of an SSFCL is shown in Fig 1.

The control system of the SSFCL:

The control system of the SSFCL is shown in term of block diagram in Fig 2. In the operation of SSFCL, fault  current need to be detected promptly before it becomes harmful to other equipment. The fault current detection is done by comparing RMS current level with a predetermined reference value. The output from the comparator used to generate switching signals for the thyristors. 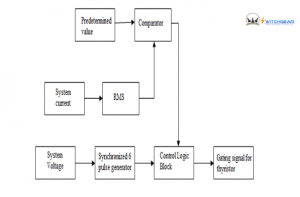 Fig 2: Control system of the SSFCL

Design concerns for the SSFCL include over voltages, exceeding the rate of rise ratings in both voltage and current (dv/dv and di/dt) for the semiconductor switches, conduction losses, high-side gate driver, absorbing the energy in the system due to the inductances in the system during the turn-off period, temperature rises, and withstanding the full system voltage after turn-off. Generally, a metal oxide varistor (MOV), also known as a surge arrestor, is used to protect the switches against overvoltage. Although there are many design considerations for each application, the benefits of a SSFCL may justify its use, and SSFCL is one of the most promising technologies for the future grid. With the introduction of silicon-carbide (SiC) as the material of choice for semiconductor switches, power ratings should only increase making the SSFCL more attractive as this technology matures.

We can see an example 15.5 kv Solid State Fault Current Limiter in Fig 3 under factory test: 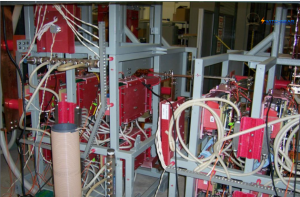 By limiting the current, we achieve fault isolation and better network protection, taking care of most of the distribution system situations that result in voltage sags, swells, and power outages.
Thus the SSFCL can substantially improve the power quality through fault current limiting and inrush current reduction.