Introduction to controlled switching system in the grid:

Controlled Switching Systems (CSS) for circuit breakers have become an economical solution and are commonly used to reduce switching surges for various switching applications. Recent developments of transformer switching taking account of the residual flux can realize an effective means of mitigating severe inrush currents and temporary overvoltage that may lead to false operation of protective relays and degradation in power quality.

CSS combined with metal oxide surge arresters can reduce undesirable overvoltage caused by the energization of a long transmission line to meet the insulation coordination. The limited number of applications for line switching may arise from initial difficulties due to insufficient technical considerations including idle time compensation.

Controlled switching system is based on the synchronization of the mechanical operation of the circuit breaker to the power system in order to switch it at the ideal electrical instant that mitigates undesired power system disturbances and stress on the electrical apparatus. Rather than reducing the transients by adding devices such as pre-insertion resistors and/or surge arresters, the Controlled switching principle is based on the optimum electrical switching instant of the load.

Desirable characteristics of a circuit breaker for use in controlled switching applications are:

The circuit breaker is a rather complex and bulky mechanical device. Fortunately, its behaviour based on its operating conditions is quite predictable. Knowledge of a CB’s electrical performance and network electrical operating condition is also of the utmost importance for an optimum CSS. These considerations are a key factor to the success of this mitigation technique to make the arc appear or disappear between the circuit breaker main contacts only by sending the CB mechanical command order at the right timing, taking as a reference the network voltage or load current.

The operating time (T operating) of a circuit breaker can be expressed as:

T operating: Operating time predicted by the controller before emitting the command

T nominal: Mean operating time under nominal operating conditions which are readily measured and programmed into the controller.

ΔTpredict: Predictable variation of the operating time (in relation with T nominal) that can be corrected by the controller

ΔTstatistic: Purely statistical variation of the operating time that cannot be corrected by the controller

ΔTdrift: The variations of the operating time with adaptive features, such as long term drift and wear-related changes

The predictable variations of the operating times (ΔTpredict) can be further split into those variations for which predetermined compensation can be applied (ΔTcomp) and those which can be dealt with adaptive features (ΔTdrift).

The following are the main influencing factors that can be compensated:

* Ambient Temperature: Temperature can influence the open/close coil resistance. Also with temperature variation, the viscosity of lubricants changes resulting in friction between sliding or moving parts in the circuit breaker mechanism.

The variations related to predetermined compensation (ΔTcomp) are readily measured by appropriate sensors and transducers in the field which result in defined changes of the operating times that can be compensated for. Typical parameters such as control voltage (V control), stored energy of the drive (e.g. hydraulic pressure, Edrive) and ambient temperature (T temp) are often compensated by the controller.

The operating time used by the controller on any given occasion is adjusted, on the basis of the sensor inputs, according to a known set of operating characteristics, which has been determined under well-defined operating conditions during the testing for each circuit breaker type.

The example shown in Figure 1 illustrates typical variations of the mechanical opening and closing times of a CB with a hydraulic drive according to three independent operating conditions: temperature, voltage and hydraulic pressure.

Figure1: typical variations of the mechanical opening and closing times of a CB((photo from CIGRE 757 brochure)

Generally, the lower the ambient operating temperature, coil voltage or drive mechanism force, the slower is the CB operation time. These characteristics are generally published by CB manufacturers who perform type tests at the factory on a single CB pole.

Each circuit breaker model and technology behaves differently and has normally a different “mesh map” figure that should be evaluated according to IEC relevant publications. For some types of CBs, modelling is simplified because they are influenced by a smaller number of conditions. This is the case for most currently available spring-type CBs, which are mainly influenced by the ambient temperature and operating voltage.

The idle-time dependence of the drive is another factor that can influence the mechanical switching time of each CB operation. It is one of the major causes of target missing for CBs that exhibit large variation for idle time and where the CSS has no idle time compensation function.

This CB characteristic, which is different for the opening and for the closing operation, makes more difficult the extraction of the contribution of each operating condition factor during a timing measurement, especially for some CBs with hydraulic operating mechanisms. A timing deviation estimation method has to be developed for factory and/or field measurement to extract the contribution of each variable.

Consistently repeatable performance of the circuit breaker in relation to open/close times along with excellent voltage withstand properties are of upmost importance when used in conjunction with a control switching device (CSD).

Operational times probably won’t always be the same as there are a number of external influencing factors such as ambient temperature, control voltage level, idle time of the circuit breaker mechanism as well as the operating mechanism technology that can affect repeatable operation times.

Statistical scatter of the operating time presents an inherent limitation to the use of controlled switching.

It is best described by a standard deviation (σmech) and can be assessed by performing operations under operating conditions identical to those experienced in the field. The maximum scatter may be approximated by ΔTstatistic = 3σmech.

Some inherent statistical scatter of the operating times will occur even at identical operating parameters and ambient conditions.

Even though the operating conditions and the idle time are the same, a real CB will not behave exactly the same from one operation to the other: the mechanical operating time will vary slightly. These small variations are normally compiled under a Gaussian distribution curve from which a circuit breaker characteristic could be extracted: the CB scatter. This characteristic is design-dependent and different for the opening and for the closing operations.

In probability theory and statistics, “variance” (dispersion or scatter) is a measure of how far a set of numbers are spread out. A small variance indicates that the data points tend to be very close to the mean (expected value) and hence to each other, while a high variance indicates that the data points are very spread out around the mean and from each other. An equivalent measure is the square root of the variance, called the standard deviation (σ). The standard deviation has the same dimension as the data and hence is comparable to deviations from the mean. 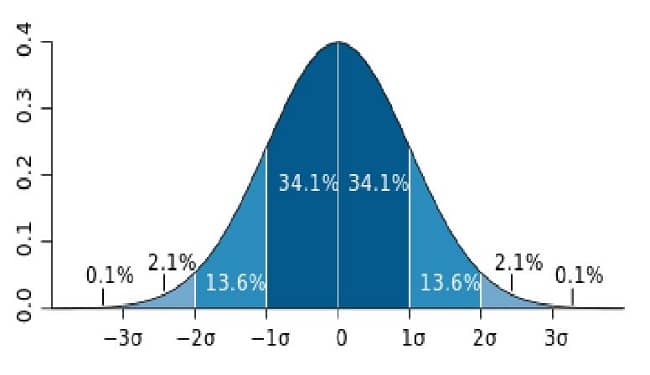 When selecting a CB for a controlled switching application, the CB scatter should be lower than a specified value of “3σ” where the majority of operating times will fit (99.8%) as shown in Figure 2.

A typical value of the CB scatter to specify for a CS application is less than ±1ms.

Siemens energy is investing in a vacuum interrupter plant in Germany