Due to the coming of winter and cold and snowy weather in most countries of the world, it seems necessary to pay attention to the severe cold and snowy conditions in high and medium voltage substations.
Meanwhile, equipment such as switchgear, which mostly uses SF6 gas. will need special attention and inspection in these weather conditions.
In this case, we tried to study the effects of cold and snowy weather on the equipment of high and medium voltage substations and suggest appropriate solutions to reduce this damage.

The severe and cold climate in AIS high voltage substation:

Among the severe climate conditions affecting AIS, some of the most pervasive in the Northern countries are manifested during the winter conditions: low temperatures, high levels of snow, and ice storms.  Such conditions affect the air-insulated substation switchgears ( circuit breaker, disconnector switches, GIS…) in different but equally difficult ways, often leading to equipment failures, alarms, and occasional blackouts.  It is important to detail these conditions separately and discusses the mitigation available for each of them.

Most electrical equipment sold for outdoor use is designed and built to international standards that require the equipment to operate within the design parameters with no loss of performance between 30°C (-22°F) and +40°C (+104°F). Such switchgear is type-tested accordingly by the manufacturers.

However, a significant number of utilities operate in countries and territories that are, during periods of the year, subject to temperatures below -30°C (-22° F), sometimes even lower than -50°C (-58°F).

Switchgears subjected to such low temperatures can be affected in a number of ways, depending on its construction, insulating medium, lubricants used for its moving parts, gaskets and seals, materials used for fabrication, etc.

Gas-filled equipment can be susceptible to leaks if the weight of snow and ice can distort the equipment and create a leak in the seals.  This may occur in GIS outdoor bushings or other gas-filled equipment, such as surge arresters.  One possible countermeasure can be to attach snow protection covers on the insulators to prevent the build-up of heavy snow and ice.

Similarly, at low temperatures, various gaskets and seals are affected.  Depending on the materials used to manufacture them, they can lose elasticity, and some may shrink.  That phenomenon can lead to leakage of insulating fluids (oil, compressed air, SF6, or other gases), resulting in environmentally damaging leaks, low-pressure alarms, or even blockage of the operation, if the level of insulating fluids reaches below acceptable limits.  Very low temperatures, leading to ingress of moisture and corrosion of internal components, also affect control cabinets gaskets.

For circuit breakers that depend on pneumatic mechanisms, should the compressed air not be

Ground freezing can have a detrimental effect on the footings on which AIS equipment is installed.

Deep freezing temperatures accelerate the footings erosion, and in some cases movement of footings can lead to operating issues (e.g. HV disconnect switches) Finally, the insulating fluids may also be affected by very low temperatures.  Insulating oil viscosity increases leading to less circulation within reactive equipment and difficulties for the moving parts in switching equipment that slows down the interrupting process.  SF6 used in outdoor circuit breakers usually at operating pressures around 480kPa (70psi), start liquefying around -32°C (-26°F), thus generating low-gas alarms and affecting the interrupting performance of the breakers.

SF6 insulated equipment is affected by significant changes in the temperature and can cause alarms or even tripping due to the change in gas pressure.  Transformers and potential devices are affected in the same way and oil levels can drop substantially due to prolonged cold weather.  Care must be taken to make sure the equipment oil levels are checked and kept at the manufactures recommended level.

Snow drifts can cause a serious threat to site access and inside the substation if blown against primary equipment.  As a countermeasure for snow drifts, an increase in the perimeter fence height can be considered.  Due to significant snow accumulation in some countries, design guidelines for safety clearances in substations requires adding a buffer of 600mm (24in) to any safety clearance measured from finish grade or from top of buildings.  In 1998 most of the provinces of Ontario and Quebec had major and long outages due to ice forming on the conductors in substations.  The ice thickness exceeded the design criteria leading to the collapse of strain conductors in substations.

In this post, we can see the snow effect on switchgear and solution for it in a high voltage substation.

In photo 1 you can see a solution as raising the equipment structure from the ground in front of the snow. 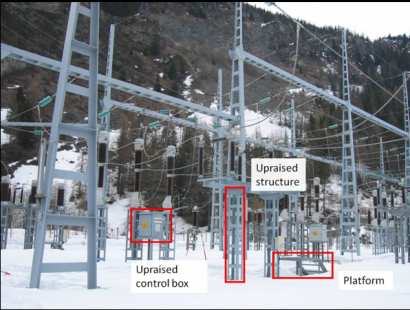 Photo 1: raise the equipment structure from the ground in front of the snow

All the above phenomena are well known to utilities operating in cold climates and over the years these utilities have arrived at various solutions in collaboration with manufacturers to deal with these issues:

There are several techniques available for de-icing equipment.  One such method uses CO2 pellets to clean and de-ice insulators similar to using sandblasting equipment.  One of the most widespread methods involves the use of a high-pressure jet of hot water.  This method is very efficient for de-icing aircraft, fire hydrants, water pipes, etc.  It is very simple and quick to use.

However, large quantities of water and power are required, and operating mechanisms are splashed by the water, which is problematic.  This technique cannot be used to de-ice energized equipment outdoors due to the increased conductivity of hot water, the effects of wind on the proper dispersal of the water stream, and the required minimum safety approach distances.

Another useful technique involves infrared technology, used to de-ice aircraft in hangars.  This method is very efficient under indoor conditions.  However, its efficiency is reduced outdoors due to climatic elements (e.g. wind, cold temperatures, freezing rain).  In order to de-ice energized equipment, a minimum approach distance must also be met, which further reduces the efficiency of the mitigation technique.

Glycol-based liquids are also used for de-icing purposes.  However, they are generally electrically conductive and would present a hazard when de-icing energized equipment.  There would also be a risk of short-circuiting the post insulators through the effects of conductive liquid runoff that has been contaminated by minerals on the surface of the ice.  It would also be important to collect these liquids for environmental purposes, which entails some costs.

High levels of snow in the substations can encroach on the limits of approach around energized equipment, making inspection and manual operating of the equipment unsafe for field personnel.  Some Canadian utilities take high levels of snow (up to 900mm/3ft of packed snow) into account when designing the foundations and height of equipment, a situation that leads to higher costs and issues related to access by operating personnel to equipment control cabinets.

On very rare occasions, cases have been reported where snow levels exceeded any expectations and due to shorter dielectric distances, L-G arcing between HV terminals and snow has occurred.  In British Columbia, at least one occurrence is known (in mid. the 1990s) where the level of snow under a 500kV line through the mountains required taking the line out-of-service.

Switchgear insulators by RG and snowcap:

Ice accumulation on insulators during cold winter days followed by slowly rising temperatures creates favorable conditions for insulator flashover, especially in heavily polluted areas.  This can cause numerous outages due to this phenomenon.  A possible solution is to use RG insulators and to monitor weather conditions.

The whole substation may not be affected due to snow and ice.  It can be only some parts of the installation, e.g. terminal parts of a disconnecting switch covered by snow-cap.  As countermeasures against snow-cap, upgrade of insulation level of insulator or bushing and attaching covers for snow-cap prevention may be considered.

Using mixed gas in circuit breaker and other equipment:

Another solution to prevent liquefaction of insulating gases is to use specific gas mixtures (such as SF6/CF4 or SF6/N2) which lower the liquefaction point of the mixture.  This solution is advantageous for static equipment (e.g. instrument transformers); however, the downside for using mixed gases in interrupting devices will result in a slight de-rating of their interrupting capability.

Buildings will have roof strength based on national requirements for snow loadings.  In Canada, for example, snow loading is per the National Building Code of Canada.  Due to severe climatic conditions, an additional external roof may be added to supplement the ability to carry additional snow loading, refer to Section 6.4 for further details.

Snowfall and ice on roads, leading to or inside the substation, can make access and egress for the transportation of equipment very difficult.  High levels of snow in the switchyard can make it difficult to install heavy emergency equipment in a timely manner.

Burst pipes can be the cause of a major outage due to flooding, e.g. in the basement of a substation where metal-clad switchgear may be located.  Flooding can be caused by a break in a water pipe due to severe low temperatures.  Additional measures must be taken to avoid such leaks in the basements of metal-clad switchgear buildings. During springtime, depending on the previous winter, there can be problems caused by melting water (e.g. damages on roads and drains) requiring repair works.

Designs need to be based on a snow-area classification reflecting past snowfall data, and in the case of an important substation, a specific design needs to be carried out.

Severe snow, the torsion break of the support part in the steel structures may occur.  This may cause maintenance staff difficulties during restoration, in getting to the power station, bringing necessary equipment and materials, and working in high places in the deeply accumulated snow.  As a recurrence prevention policy, the hydropower stations located in the heavy snowfall area need to be identified, and the exchange of outdated supporting metal fittings with those with more margins to high tension and torsion completed.

Substation design should cater to conditions yielding maximum recorded values.  The maximum designed weight of snow sticking to the conductor is 6kg/m (43lb/ft).

A gas leak may occur from the bushing of a neutral surge arrester due to a snowy load.  The countermeasure is to attach a snow protection cover.

Another mitigating solution for circuit breakers:

Each severe weather phenomenon must be dealt with depending on what equipment is likely to be affected and the consequences.  Mitigation for low temperatures involves using materials, lubricants, seals, and gaskets that have been tested and found suitable for specific weather conditions.

One solution to prevent the increase in viscosity of insulating fluids or the liquefaction of insulating gases is to use electric heaters attached to the tank, wrapped around conduits, and placed at sensitive locations in the control cabinets.

If platforms are not sufficiently raised, access to the control cabinet can become difficult.

The use of tank heaters comes with caveats: proper sealing of the heater to prevent moisture ingress between it and the tank is required. If such sealing is not effective, it can lead to serious corrosion of the tank.

Some manufacturers offer complete blankets enclosing the entire interrupter tank; see example in photo 3 below.  It is, however, a solution that has yet to be proven on a long-term basis. 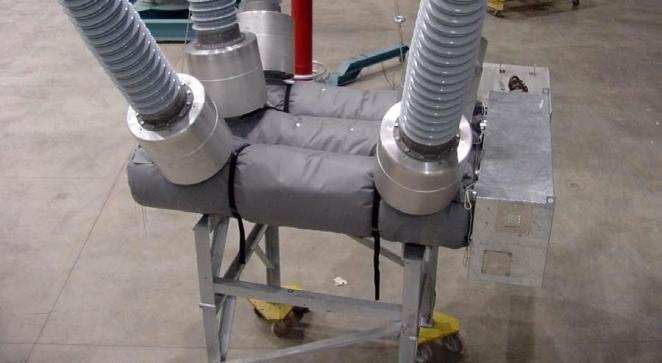 Wildlife protection can be installed on switchgear as it also protects against ice build-up on switches and around insulators and bushings.  Many have been replaced with improved designs.  Higher creepage bushings and insulators can be installed in high frost or high pollution areas to combat insulation flashover.

Most of the contents of this article are taken from Air Insulated Substation Design for Severe
Climate Conditions CIGRE BROUSURE 614  (Working Group B3.31) which are mentioned in the sources section.

The CO7 Technologies company celebrated the opening of its factory in Lachine, Quebec