Photo from the article: designing a new smart IED for detecting and clearing faults in solar networks by Mahsa Shahrjerdi, Navid Ghaffarzadeh

A circuit breaker control IED can be installed either in the circuit breaker cabinet in the switchyard or within the relay/control room. we consider that the BF, AR, and CS functions are not integrated into the Breaker Control IED.

In some substation applications, instead of having a separate trip/close wire connected to the same Circuit Breaker for each individual protective or control IED, a circuit breaker control IED can be used to combine all trip or close signals from all the IEDs that need to operate the high voltage circuit breaker.

In addition, the circuit breaker Control IED monitors any change of the CB status (e.g. position

status, pressure, etc.) via auxiliary contacts and provides them to related IEDs. It will also provide some auxiliary functions such as breaker status supervision and an anti-pump circuit.

The main functions of a circuit breaker Control IED:

b) Execution of Trip/Close command of the primary switches either locally or remotely (SCADA, Bay Control Unit, protection IEDs, etc.)

f) Pressure supervision. The Breaker Control IED supervises all kinds of pressure signals to alert and block tripping/closing commands depending on the pressure level.

Additionally, other status information might be available such as Low Pressure, etc.

Figure 1 shows a typical application of a circuit breaker control IED based on GOOSE communication (to simplify the figure, only network A is shown while in real projects, a redundant separated Network B may also be available for higher reliability consideration).

In a substation, the Breaker Control IED is located between the secondary devices and the high voltage primary equipment, functioning as a digital interface of the un-digitalized breakers. 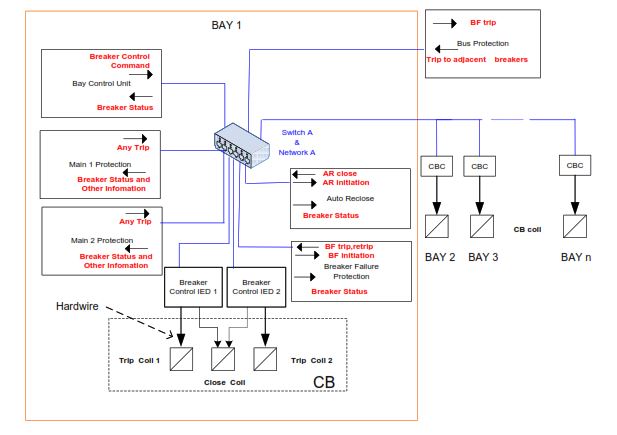 For the GOOSE communication, the circuit breaker control IED can work as a subscriber and a publisher at the same time, so it can receive and send GOOSE messages simultaneously.

As a publisher, the Breaker Control IED continuously publishes the status information gathered from the breakers to all other IEDs on the process bus, so all the subscriber IEDs (including protection devices, AR and BCU) can receive these messages and thus get the real-time information of breaker position status and some other information, this information is useful to these bay level IEDs and can be applied into all kinds of function logic processing.

As a subscriber, the circuit breaker control IED receives GOOSE control commands from all the related publishers (such as protection devices, AR, BF, and BCU).

In this figure the abbreviations are as follows:

In-circuit breaker Control IED should not only provide the functions of GOOSE message sending/receiving processing and tripping/closing the breakers but also provide some auxiliary functions such as breaker status supervision and anti-pump circuit. 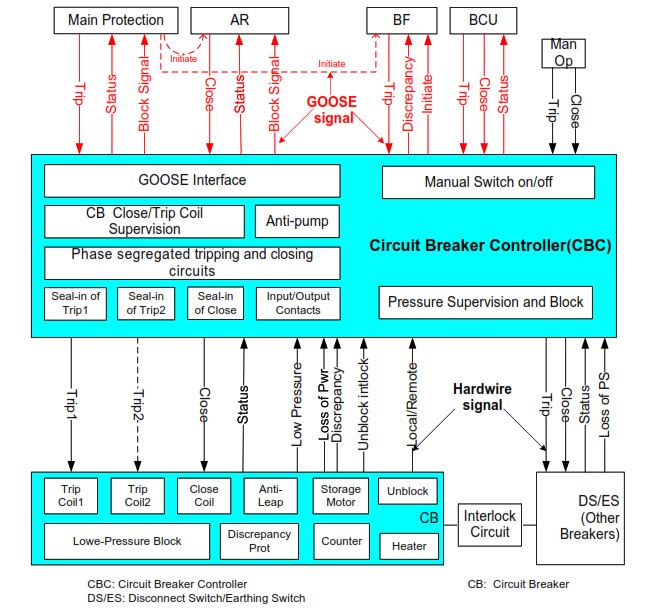 Source
Designing a new smart IED for detecting and clearing faults in solar networks article by Mahsa Shahrjerdi, Navid GhaffarzadehApplications of IEC 61850 Standard to Protection Schemes (CIGRE 540)IEC 61850 series CIGRE Paper B5-106 Process communication in switchgear according to IEC 61850 – architectures and application examples, CIGRE 2008 session. CIGRE Brochure 326, “The introduction of IEC 61850 and its impact on protection and automation within substations”. SC B5 WG B5.11, 2007CIGRE Brochure 401, “Functional Testing of IEC 61850 Based Systems”. SC B5 WG B5.32, 2009.
Tags
Automation IEC61850

The Hannover Messe Exhibition, Germany is held digitally In the year 2021