Arcing faults cause both personnel hazard and significant economic losses due to damage to equipment and interruption of processes. The awareness of these risks has recently significantly risen, and methods to mitigate the consequences of arc flash incidents have been introduced. This article summarizes the features and consequences of electric arcing faults, compares different protection methods and introduces a fast, selective arc-flash mitigation technology.

The incident energy of an arc flash depends on associated voltage, current, and arcing time. The system voltage is normally not adjustable in regards to reduction or eliminating arc flash. On the other hand, the fault duration or arcing time can be restricted in various ways.

These are systems designed to limit the arc incident energy in the legitimate hope that this will reduce its effects. Typical active mitigation strategies involve either diverting the arc from its original location (earthing switch) or accelerating the protection system (with use of different sensors other than traditional current transformers to trip the main circuit  breaker).

Acceleration of the protection system will result in reducing the arc duration (and potentially the arc current magnitude) and thus its incident energy. When chosen to activate an arc quenching device (e.g. an ES) the reduction in the incident energy can be more significant if the device acts much faster than the circuit breaker can extinguish the current.

Switchgear standard current sensors provide actual current information. Normal over current or bus differential  protection systems can be used to clear arc faults. The time required for the detection and interrupting of an arcing fault using modern relaying and state-of-the-art circuit-breakers is a  minimum of 50 ms, allowing for relay trip contact-closure time, plus circuit breaker break time (opening time + arcing time). In many cases, the operating time may be greater than 50 ms, depending on the type of relay and the circuit-breaker technology.
This is too slow to ensure arc fault clearing before the pressure peak is reached and, if forces are sufficient to blow covers or doors off (in the case of non arc-resistant switchgear), this will happen within this time frame. Hot gases will be emitted into the switchgear room, possibly towards an operator, if present.

To decrease the arcing time, one or more of the following is required: reducing arc sensing time, reducing time for operation of protection logic, and reducing operating time for operation of the current interrupting device. Arc sensing time can be reduced by use of optical sensors such as spot sensors (also known as point-sensors) or line-sensors (also known as loop-sensors) which detect abnormal light within the switchgear assembly. They typically monitor locations within the switchgear assembly where an arc fault can develop and their locations are normally based on specific and detailed guidelines from the switchgear manufacturer.

The optical sensors’ signals are collected by an evaluation unit which processes a trigger signal, if the
sensor input exceeds a defined threshold level. The signal generation by the optical or electrical method is based on simple operation of an operational amplifier. The detection signal is compared against a threshold signal.
In order to avoid unintentional tripping caused by light sources other than an electrical arc, optical sensors are typically combined with additional current information. The evaluation unit can send a trip signal to the arc quenching device.

We can see a example of common point sensor and fiber optic loop sensor in figure 1. 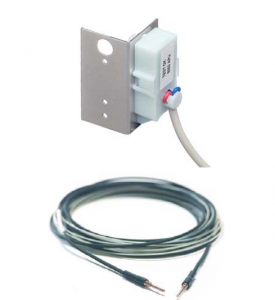 In tight enclosures, such as a GIS compartment, integrated pressure sensors can be used to detect a pressure increase caused by an arc fault. The principle may also be applied within air insulated switchgear, using the pressure wave to trip the system. The pressure rise is due to expansion of gas inside the switchgear compartment due to thermal heating by the internal arc. Pressure sensors detect this change of pressure and give a signal to a control unit, or directly to a switching device through a mechanical linkage, above a defined pressure threshold.

The pressure sensor may be integrated in the wall of the gas tank of gas-insulated switchgear or in the metal encapsulated wall of the air-insulated switchgear and detects a pressure increase caused by an arc fault within the entire switchgear. In the case of an arc fault the pre-loaded short-circuiting devices, installed in the incoming feeder cubicles and interconnected to the sensors, are switched on.
By activating such a device, the arc fault is transformed into a galvanic short circuit and the arc fault is quenched.

For gas-insulated switchgear, the pressure increase may remain below the opening pressure of the bursting discs and the gas tank will remain sealed. Thus, there are no pressure effects onto walls or floors surrounding the switchgear.
For air-insulated compartments the pressure sensor may be installed in the roof or in the rear wall of each cubicle, and work onto a common tripping shaft/linkage to operate an arc-quenching device for the switchgear. 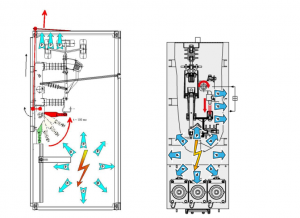 The over-pressure due to an arc, even in a non-tight compartment, leads to some deformations of dedicated parts which could be used as information to possibly trip a system. Some realisations are using the movement to directly trip a mechanical short-circuiting device while some others use the deformation to activate a contact used as signal by some control system.

Although temperature is an effect of arcing faults, all known temperature sensors have a response time much longer than acceptable in arc protection. Thus there is no application known to date of any temperature sensor in arc effects mitigation systems.

Products using the sound signature of an arc to detect its presence can be found in the market but as previously mentioned they also utilize others properties of an arc in their detection logic. When using light as the other attribute of the arc event, the intensity of both the light and the pressure wave producing the sound must be above certain thresholds. Moreover the difference in the speed of the light and the sound signals must be characteristic of an arc. Indeed an arc generates a unique time delay signature that differentiates it from other sources of light and sound.
As described in Figure 3 below, the logic will detect the light signal above the threshold value, and then waits for the pressurized sound signal which should be received within a design specific wait time (1ms) if an arc is taking place in the switchgear. If the sound signal is received with higher than the threshold value as well as within the design specific wait-time, a trip signal is issued. When optimized, this system can detect the arc event in as quickly as 1ms.

The technologies introduced above for sensors may be individually or in combination depending on the  conditions used.