Transients caused by switching operations in linear systems can be analyzed by using the superposition principle.The switching process caused by an opening operation is obtained by adding the steady-state solution, which exists prior to the opening operation, and the transient response of the system that results from short circuiting voltage sources and open-circuiting current sources to a current injected through the switch contacts.

Since the current through the switch terminals after the operation will be zero, the injected current must equal to the current that was flowing between switch terminals prior to the opening operation. When the contacts of a switch start to open a transient voltage is developed across them. This voltage, known as TRV, is present immediately after the current zero and in actual systems its duration is in the order of milliseconds.

A good understanding of the transient phenomena associated with circuit breaker operations in power systems has led to improved testing practice and resulted in more reliable switchgear. Recommended characteristic values for simulation of the TRV are fixed in standards.

In Fig Below you see TRV circuit breaker terminals when interrupting the current in very simple circuits. Observe the different wave shape that appear in each case. The representation of each circuit is that depicted in the figure, except for the interruption of the inductive current since in this case the current zero occurs when the voltage across the inductor terminals is maximum, and a capacitive element is needed to account for the trapped charge. The latter oscillation is caused by the energy transfer between the inductor and the capacitor.Although real systems are much more complex than the circuits analyzed above, these cases show that switching under normal operating conditions can be categorized as resistive, inductive, and capacitive. 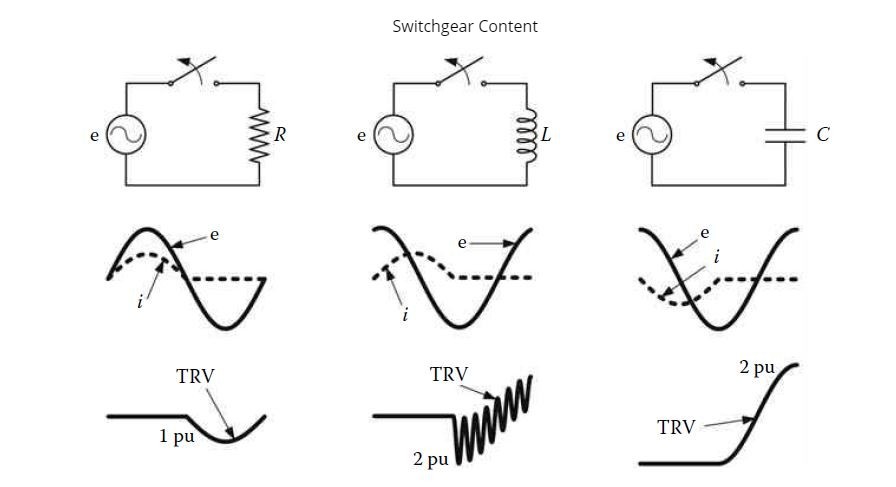 When the breaker chops the peak current, the voltage increases almost instantaneously, if this over voltage exceeds the specified dielectric strength of the circuit breaker,re ignition takes place.When this process is repeated several times, due to high-frequency reignitions, the voltage increase continues with rapid escalation of voltages. The high-frequency oscillations are governed by the electrical parameters of the concerned circuit,circuit configuration and interrupter design, and result in a zero crossing before the actual power-frequency current zero.

In the figure below compares the load side voltage and the TRVs that are generated when arc interruption takes place at current zero and before current zero (current chopping),respectively.It is obvious from this example that the second case is more severe.The importance of current chopping can be easily understood by neglecting the influence of losses at the load side. After current interruption at current zero, the energy stored in the load side is the energy stored at the capacitance, whose voltage is at the maximum. 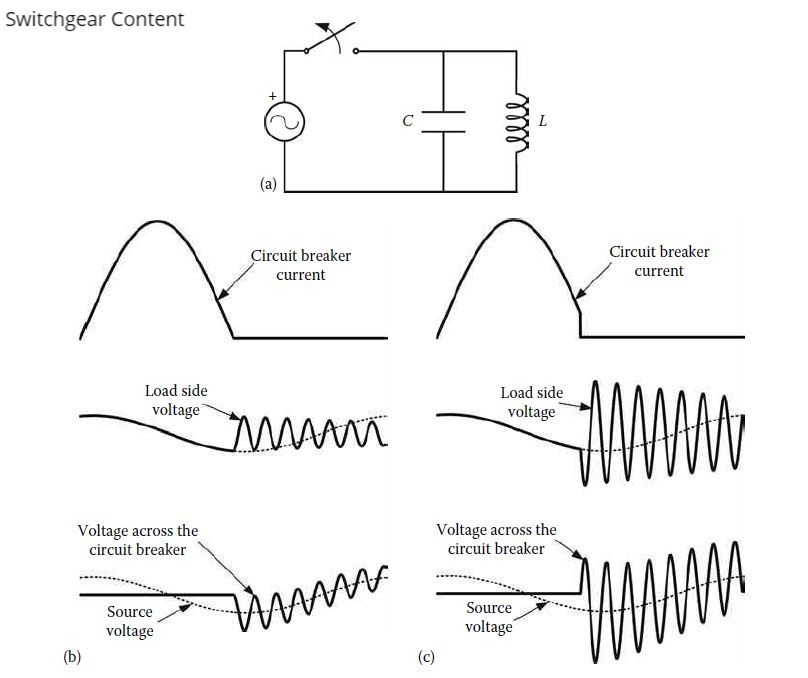 The phenomena of chopping and reignition, with associated high-frequency oscillatory over voltages, are attributed to the design of the circuit breaker. Circuit breakers are designed to cope with high fault currents. If a design is concentrated only on an efficient performance for high currents, it will be also efficient for small current and will try to interrupt before the natural current zero. This may produce current chopping and reignitions with adverse consequences. The breaker design should incorporate features to cope equally well with small and high currents.