Shunt-reactor switching is by far the most common practice of the inductive-load switching. Shunt reactors are installed for overhead-line capacitance compensation, and switched in or out depending on the momentary line load. Since the shunt reactor can be treated as a lumped circuit element having a stray capacitance, the equivalent load circuit can be simplified to a straightforward LC circuit.

At interruption, actually current chopping, the LC circuit produces voltage oscillations, reaching a maximum voltage Ump, which is the 1 p.u. of the system voltage augmented with the additional current-chopping contribution. Generally, the single-frequency oscillatory TRV is of high frequency, standardized by IEC 62271-110 to values between 6.8 kHz at the rated voltage of 72.5 kV and 1.5 kHz at 800 kV.

Similar to the capacitive-current switching, the reactor current is low enough that interruption can occur after a very short arcing time. This implies that the circuit-breaker gap might have not yet reached a sufficient spacing at current zero to withstand the TRV and, if so, a breakdown is the consequence. In this case, the breakdown is termed a re-ignition because the high-frequency TRV makes it happen within a quarter of a power-frequency period after interruption.

Unlike a restrike in capacitive circuits, the energy delivered to the inductive re-ignition discharge is relatively low, being the discharge of the stray capacitance; a high-frequency re-ignition current will flow briefly and the gap may or may not recover from the event.

Multiple re-ignitions may be onerous for gas and oil circuit-breakers, and this is the reason why the shunt-reactor switching is sometimes termed “a circuit-breaker’s nightmare” – also and not least because it is a daily switching operation. 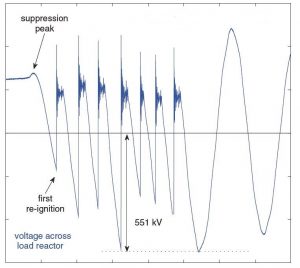 In this Fig for a SF6 circuit breaker test . Seven re-ignitions can be observed before recovery is achieved. Immediately after re-ignition, a re-ignition current of very high frequency keeps the gap conducting during approximately 100 μs. The maximum voltage reached across the load reactor is 2.3 p.u.Without re-ignitions it would have been 1.08 p.u. due to the very small chopping current. The peak value of TRV is 3.3 p.u.

In this case, despite the very small chopping current, the load voltage reached after multiple.

Multiple re-ignitions of breakers during shunt-reactor switching can be avoided by controlled switching. Using controlled, instead of random contact separation well in advance of current zero, avoids short arcing times and interruption follows when the gap has reached sufficient spacing.