Generator Circuit Breakers were used in multi-unit stations where a number of relatively small generators were connected to a common bus. The rapid increase in generator size and system fault current levels soon exceeded the interrupting capabilities of this type of switchgear. The unit concept was then adopted where each generator had a separate steam supply auxiliary system directly connected to a step-up transformer and high side breaker(s).

The use of generator circuit breakers for the switching of generators at their terminal voltage offers many advantages when compared to the unit connection, e.g:
– simplified operational procedures.
– improved protection of the generator and the main and unit transformers.
– increased security and higher power plant availability.
– economic benefit.

The major demands on the electrical layout of power plants can be summarised as follows:
– transfer the generated electric energy from the generator to the HV-transmission system considering operation requirements as well as availability, reliability, and economical aspects
– supply of electric power for auxiliary and station service systems to ensure a safe and reliable power plant operation 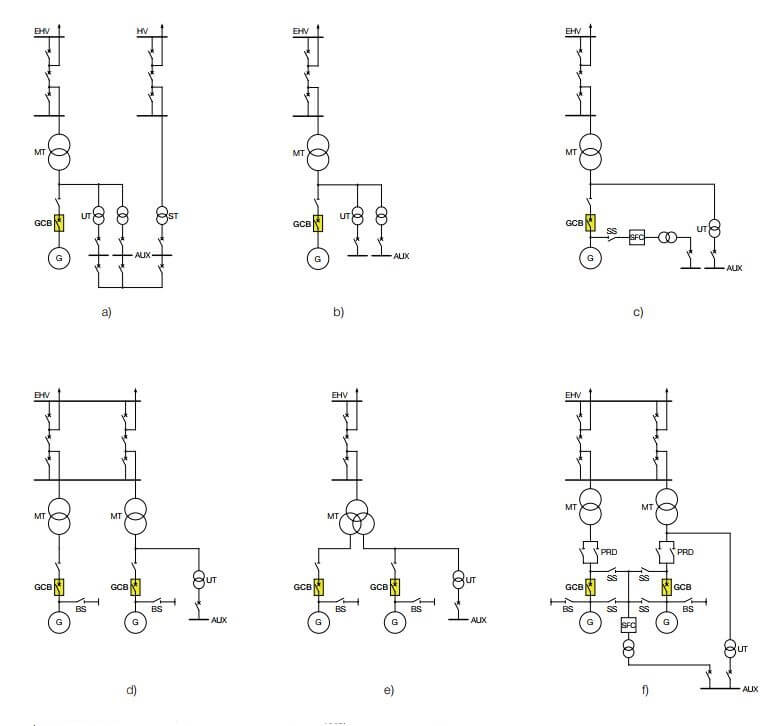 There are several synchronization methods in the case of pumped storage power plants.

The static frequency converter (SFC) starting scheme mainly consists of a thyristor converter connected to a unit transformer at the HV side and an inverter connected to a generator. The inverter starts the generator from a low power frequency and gradually increases it up to the rated power frequency. Then the generator is excited to produce the power which may have a different phase angle from that in the network. The generator is synchronized with the HV network by either a generator circuit breaker or an HV circuit breaker, at the instant when the phase difference between the generator and the HV network is minimized.

For another example, a back-to-back starting scheme can be used in a power plant with several generators. The power source produced by the generator operating at nominal condition is used to start the halted generator up to the rated power frequency. The generator is synchronized with the HV network with either a generator circuit breaker or an HV circuit breaker.

According to IEC/IEEE 62271-37-13: the rated short circuit duty cycle of a generator circuit breaker shall be
made of two units of operations with a 30 minutes interval between operations
(duty cycle: CO – 30 minutes – CO)

This time between two operations is necessary to restore the initial conditions and/or to prevent undue heating of parts of the generator circuit-breaker (this time can be different according to the type of
operation);

Nuventura and E.DIS collaboration about smart distribution grid in germany