Once the electrical engineer has specified the preliminary configuration of the GIS and the primary equipment data have been determined and specified, further studies related to the engineering and logistics of delivery and erection need to be performed.

The most important engineering studies are summarized as follows:

The electrical engineer should specify that the manufacturer performs a TRV study to evaluate the worst-case rate of rise of recovery voltage (RRRV) and the maximum peak voltage across the circuit breakers considering the transient response of the electrical network surrounding the GIS. The calculated TRV values should be compared to the TRV ratings guaranteed by the test report of the circuit breaker and to standard TRV envelopes that can be found in industry standards. 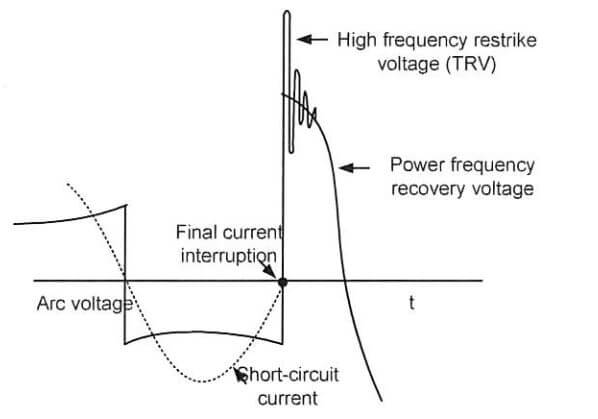 It is the purpose of the study to evaluate the worst-case RRRV and maximum crest voltage across the circuit breakers in the GIS in accordance with the transient response of the electrical network surrounding the switchgear.

For more information about TRV, you can see this article.

The electrical engineer should specify that the manufacturer performs a VFT study. In gas-insulated switchgear (GIS), very fast transient (VFT) overvoltages with oscillation frequencies in the MHz range may occur during disconnect switch operations because of the fast voltage collapse within a few nanoseconds and due to the length and coaxial design of the GIS.

In the vicinity of the operated disconnect switch, frequencies of up to more than 100 MHz may occur. At more distant locations inside the GIS frequencies of several MHz can be expected.

The frequencies and the amplitudes of the VFT depend on the length and the design of the GIS. Due to the traveling wave nature of the phenomenon, the voltages and frequencies differ from location to location within the GIS.

High amplitudes occur if long sections of gas-insulated buses are switched and if tapped buses exist at the source for the main bus section. If the natural frequencies of the source and the switched end of the bus are similar and if the voltage difference across the disconnect switch is high, then a high voltage difference occurs during the opening of the disconnect switch. The highest amplitudes of the VFT generally occur on open GIS sections.

The purpose of the study is to simulate the VFT overvoltages within the GIS caused by energizing switchgear segments by means of disconnect switches. VFT overvoltages caused by circuit breaker switching operations should also be calculated.

The insulation coordination study investigates the overvoltage stresses at the gas-insulated switchgear and its bays and cables caused by lightning surges approaching the substation and the lines connected to it. Therefore, the maximum voltage stresses within the GIS and at the bays – caused by typical lightning strokes (remote strokes, direct strokes to conductors, strokes to last towers) to the overhead lines – should be simulated for several specified configurations of the substation, including the normal operating configuration.

The correct insulation coordination level should be verified by comparing the insulation levels of the individual equipment with the maximum overvoltage stresses to be expected when taking into account the maximum correction and safety factors according to industry standards.

The electrical engineer should specify that a study is performed to determine if there is the possibility of Ferro-resonance occurring in conjunction with the switching in and out of service of potential transformers in the GIS. The study should indicate the severity of the condition and recommend mitigation, such as tuned inductors.

The electrical engineer should specify that the calculated and measured capacitance and resistance values for each component in the GIS, including, but not limited to, the bushings, bus runs, switches, and circuit breakers, be provided by the manufacturer.

The electrical engineer should specify that the manufacturer performs any studies such as shielding and mitigation procedures for interference with control, protection, diagnostics, and monitoring equipment.

The engineer should request that the manufacturer provide documentation for any special civil designs required to accommodate the GIS due to specific site conditions.

All studies should be provided in formal reports forwarded to the user within the specified time frame after the contract is awarded. All documentation including, but not limited to, calculations, curves, assumptions, graphs, computer outputs, and so on, should be provided to support the conclusions reached.

-Demands imposed by the service and maintenance of the gas-insulated switchgear and possible future extensions.

Nuventura and E.DIS collaboration about smart distribution grid in germany